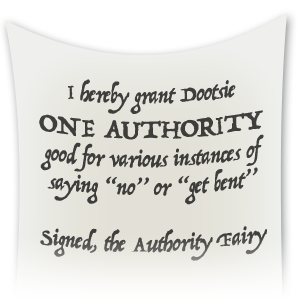 My boss hired a business consultant, mostly to just look at our internal structures and see if there need to be adjustments to our workflow. Aside from being smart as a whip, she was full of encouragement. I felt very uplifted after my first meeting with her. I also found myself coming to a major realization:

NO ONE’S GOING TO.

There is no authority fairy. There will not be a brilliant white light from the heavens that shines down and bestows upon me my Certificate of Authority. Even my boss isn’t going to lay out what I’m allowed to be an authority on.

Importantly, I sometimes face negative consequences for situations wherein I haven’t acted with authority. Because I, for instance, decided to let something slide because it’s not my position to say no, I might have to sit through a lecture about why it was wrong and very bad. I kept thinking ‘yes, but I have zero power to stop it!’

This year, I’m turning 30. I’m smart and qualified. I’ve worked at this company for eight years. If I haven’t earned some authority by now, it’s time I left.

I’ve been stuck behind my feelings of inferiority and my desperate need to avoid conflict. What I’ve done is save other people conflict and heap it on myself. And that’s not sustainable. I’m running out of emotional resources to deal with that and honestly? I’m runnin’ out of fucks to give here.

So, step by step, I’m claiming my authority–given to me by me. This includes some basic business self-advocacy that I’ve just let fall by the wayside. Here are some of my goals:

3 thoughts on “Under My Own Authority”

Hi, I'm Dootsie! I have been Very Online since around Y2K. I work professionally as a graphic designer, writer and all-around busybody. I hope we can connect!